Each year, GEM welcomes around 300 international students for different programs. Take the year 2014 as an example, there are around 180 incoming students and it is expecting around 90 to come in the January Intake 2015. As Andrea Yesilada, the Incoming Students Coordinator said, “the international student profile varies each school, however, the high enthusiasm of the students always remains the same.” Among many responsibilities of Andrea, one of them is to help incoming students to complete the process of Documents for Formalities GEM Student ID Card at the beginning of the semester.

What she loves about her job is hearing the testimonials from students from various countries and their motivation of studying in France. Let’s hear what the students said about their motivation to be at GEM and their expectation in the upcoming days.

“The motivation for me to choose GEM is because the city is very beautiful with mountains and amazing scenery. I have studied French before and it is really a chance for me to practice it. When I searched online I found that GEM is very good and a good choice. I will stay for one semester but I am in the process to extend my stay for one year because I like being here. I came to France in high school for a short trip for vacations but I haven’t really lived or studied in France. Even though I have learned French in America and tried to speak to friends everywhere. When I got here, it became very difficult. It is  more difficult than I thought but I am just trying. In just one semester, I want to improve my French and get the experience. I am trying to be here for a year and it will be a very cool thing if there is a degree to get. I will focus on improving my French learning and continue my study in international business and mainly, to enjoy being in France and having the experience.”

“I chose GEM because of the ranking of this school and I could have the chance to have a double degree. One will be my master degree of engineering and the other will be master in management. It is a good coordination. At GEM, it offers great lectures and I get the chance to know the French partners, understand the culture and enjoy the atmosphere, especially the mountains, learn some French, get to know some French people and enjoy some events in order to embrace the new environment.”

“I chose GEM after my research on the internet in terms of Economics and Business. GEM is one of the best choices. Now I can practice my French a lot. As I am at GEM for just a couple of months, I would like to get the international experience around the people here who come from all around the world, and get a point of view of what business is and what French people think of business. I think that French people are very nice, open-minded and friendly which makes the adaptation easier. ”

“I chose GEM and Grenoble because I love the mountains here. Considering my expectation here, at the first beginning, I was afraid that if I didn’t speak French with them, the local people would not talk to me. Actually they are very kind and helpful. I am planning to improve my French here even though I have taken some French class at home. The Aloha team were very helpful so that I can engage in the environment. The students here are really international and we help each other. Everything is in English. That’s the great part.” 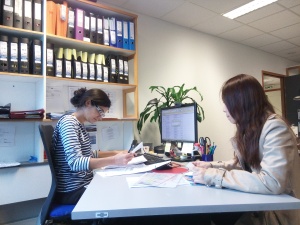 “I am an exchange student from Taiwan. I chose GEM because I wanted to go to France and based on the exchange programs provided by my home school, GEM was one of the best choices I could have. I applied for the Master 2 for one semester. Before coming, I had done some research and known that GEM is one of the best in terms of management. Everything went well after I arrived there. The weather was super nice. There were lots of events to participate and I had no difficulty to engage here. My expectation is to study French well and comprehensively. I felt good but one thing I need to get adapted is that the stores here close at a too early time comparing to Asia. I am not nervous about learning French and with the support of French classes; I am confidant to learn it well.”